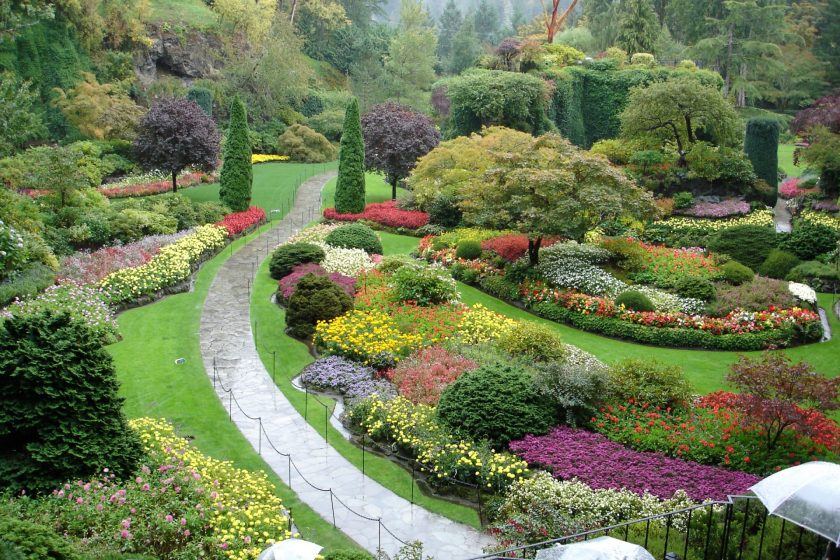 The gardens are located in the Halifax Regional Municipality, Nova Scotia on the Halifax Peninsula near the popular shopping district of Spring Garden Road and opposite Victoria Park.
The gardens were designated a National Historic Site of Canada in 1984.

They are open annually from approximately May 1 until November 1. The landscaping style is Victorian formal and provides a popular setting for wedding and prom photos.

In addition to statues and extensive flower beds, there are three fountains, two stone bridges, three ponds (one large and two small), and a small concession building (located in the original Horticultural Hall).

The gardens also feature a bandstand that is used for free public concerts on Sunday afternoons during the summer.
There are celebrations in the gardens every year on Canada Day (July 1) and Natal Day (the first Monday in August).

The Halifax Public Gardens was established in 1874 by the amalgamation of two older gardens, the Nova Scotia Horticultural Society Garden (laid out in 1837) and an adjacent public park (opened in 1866).

In 1872, Richard Power was hired as the park’s superintendent.
He introduced an axially symmetrical plan which governs the overall design of the site.
Over the years, he oversaw the introduction of the bandstand (designed by architect Henry Busch), fountains, statues, and wrought iron gates as well as establishing the bedding out of annuals in highly designed carpet beds, redesigned Griffin’s Pond and introduced water fowl.

The gardens were designated a National Historic Site in 1984, and a Municipally Registered Property under the Heritage Property Act in 1991.