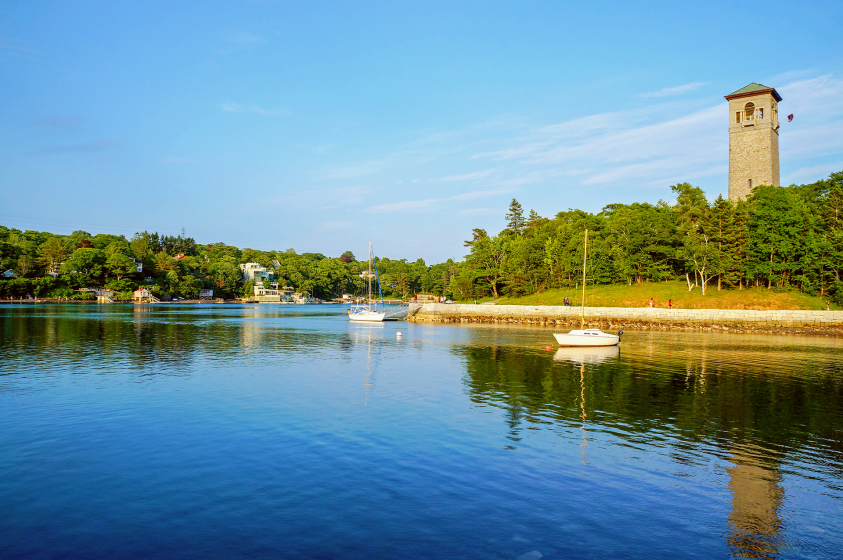 Sir Sandford Fleming Park is a 95-acre (38 ha) Canadian urban park located in the community of Jollimore in Halifax Regional Municipality.It is also known as Dingle Park which means wooded valley. The park was donated to the people of Halifax by Sir Sandford Fleming. The centrepiece of the park is an impressive tower that commemorates Nova Scotia’s achievement of representative government in 1758. Constructed between 1908 and 1912, the Memorial Tower was erected during the same period of building other commemorative towers in the British Commonwealth, notably Cabot Tower in Bristol, England (1898) and Cabot Tower in St. John’s (1900).

During the 1880s Sir Sandford Fleming, famous for introducing standard time to North America, established a summer retreat on property fronting Halifax’s Northwest Arm, after he finished constructing the Intercolonial Railway. He called his retreat The Dingle, the name that is still used today.

The park contains two walking trails passing through forests, heath barrens, saltwater marsh, and a large pond (Frog Pond). As well, the park also hosts a small sandy beach. The water quality of the beach had been a long, contentious issue due to decades of raw sewage being dumped into the Northwest Arm. Following the completion of new sewage treatment facilities in 2008,[2] many of these concerns were allayed. Swimmers should check the municipality’s website, and note that users should not swim at the Dingle beach for three days after heavy rainfall.

In 1908, Fleming donated the property to the citizens of Halifax for use as a park and proposed the construction of a tower within it to commemorate the 150th anniversary of the establishment of representative government in Nova Scotia, the province having held on 2 October 1758 the first elected assembly in what is now Canada.[3]

An ardent imperialist, Fleming also intended the proposed tower to serve as a memorial to the development of parliamentary institutions in the British Empire, now the Commonwealth. Designed by the architects Sidney Dumaresq and Andrew Cobb,[4][5] the tower stands out as a rare form of architectural expression in the pre-World War I period of rising Canadian nationalism and fervent loyalty to the British Empire. The Memorial Tower is architecturally important because it combines Italianate influences with local construction methods and materials.[6] The ten-storey stone “Dingle Memorial Tower” plan was accepted by the City of Halifax and the local Canadian Club undertook a fundraising drive to pay for construction. Donations were received from throughout the British Empire and plaques commemorating the contributions, as well as stones from all of the countries of the Empire were placed on the interior walls.

It was formally dedicated in an impressive ceremony in August 1912 by Canada’s Governor General the Duke of Connaught who was also Queen Victoria’s son Prince Arthur. The presence of members of the Royal Family and dignitaries from other parts of the Empire emphasized the importance of the occasion.[7]

In 1913, two large bronze lions at the foot of the tower were donated by the Royal Colonial Institute of London. Designed by British sculptor Albert Bruce-Joy, they are similar to Sir Edwin Landseer’s lions at Nelson’s Column in Trafalgar Square.

The Memorial Tower was restored between 2010 and 2013. It was partially reopened at the beginning of August 2012 when the 100th Anniversary was celebrated at the opening ceremony. The bulk of the restoration was done by Coastal Restoration and Masonry with the involvement of a number of other specialist firms. The restoration included repointing the entire tower interior and exterior, rebuilding the copper roof, installing new stainless steel grilles on the Observation Deck to keep birds out and people in, reinforcing and refinishing the internal stairs, installing new interior and exterior lighting, refurbishing the window openings and installing new windows, and refurbishing the 35 plaques on the interior walls and the two bronze lions guarding the entrance. The total cost was approximately $2.3 million. The Dingle Memorial Tower is open to the public in the summer months and has views of the city and Northwest Arm.