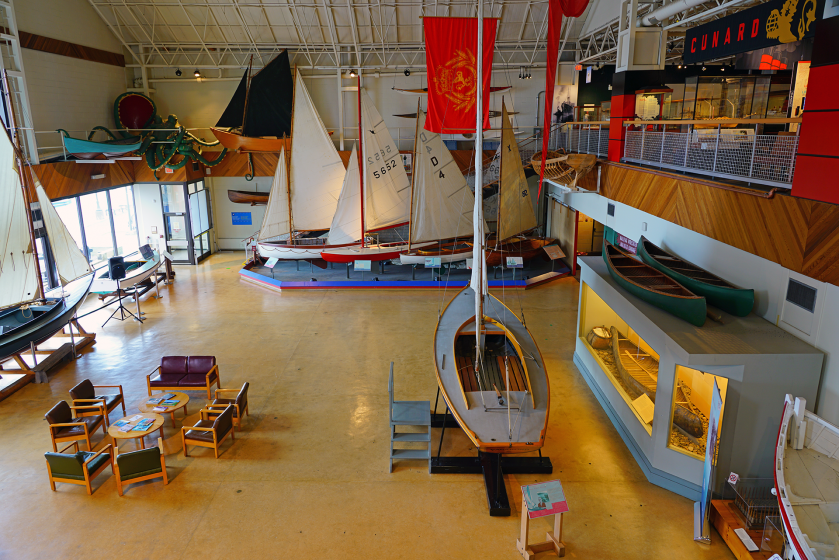 The Maritime Museum of the Atlantic is a maritime museum located in downtown Halifax, Nova Scotia.The museum is a member institution of the Nova Scotia Museum and is the oldest and largest maritime museum in Canada with a collection of over 30,000 artifacts including 70 small craft and a steamship: the CSS Acadia, a 180-foot steam-powered hydrographic survey ship launched in 1913.

In addition to the over 30,000 artifacts, the museum also has a collection of 30,000 photographs as well as a large collection of charts and rare books. A reference library, open to the public, is named after the Museum’s founding director, The Niels Jannasch Library. The museum has Canada’s largest collection of ship portraits including the oldest ship portrait in Canada as well as a large collection of ship models including the original production models of the television show Theodore Tugboat. Ongoing restoration of Whim, a 1937 C-Class sloop can be found in one of the boatsheds on the wharf behind the museum. In addition to this current restoration project, the boatsheds house some of the museum’s small craft collection. During the summer months three boats in the working small craft collection can be found moored next to the CSS Acadia. In July 2017 the museum also completed restoration of the small schooner Hebridee II.

Public galleries include the Days of Sail, the Age of Steam, Small Craft, the Canadian Navy, the Halifax Explosion, and Shipwrecks. A special permanent exhibit explores the sinking of RMS Titanic with an emphasis on Nova Scotia’s connection to recovering the bodies of Titanic victims. The museum has the world’s foremost collection of wooden artifacts from Titanic, including one of the few surviving deck chairs. The Titanic exhibit also includes a child’s pair of shoes which helped identify Titanic’s “unknown child” as Sidney Leslie Goodwin.[1]

The adjacent exhibit “Shipwreck Treasures of Nova Scotia” explores the many other shipwrecks off the coast of Nova Scotia including archaeological discoveries on naval shipwrecks in Louisbourg Harbour and an unknown 1750s schooner at Lower Prospect, Nova Scotia. The results of treasure hunting are also featured in a section on Cape Breton treasure wrecks which has displays of weapons, instruments, gold and silver from wrecks such as the 1711 HMS Feversham, the 1725 wreck of Chameau and the 1761 wreck of the ship Auguste.[2]

The museum also has a changing exhibits gallery. A 2009 exhibit Ship of Fate: The Tragic Voyage of the St. Louis was the first Canadian exhibit to explore the 1939 voyage of the Jewish refugee ship MS St. Louis.[3] The Museum became the first museum in North America to present an exhibit about the lives of gay seafarers in 2011 when it presented Hello Sailor: Gay Life on the Ocean Waves, adapted from an exhibit developed at the Merseyside Maritime Museum in Liverpool, England.[4] The 2012 exhibit explores the experiences of the cable ships based in Halifax who recovered most of the victims of the RMS Titanic sinking.